*Special Blog post - written by Anto, due to nagging from his wife about his lack of weight pulling on the blog front* If you like his work and would like to see more let us know!

Another morning in Paris, another Raspberry Crepe breakfast (this one made by Anto). After the *very* long day visiting the Château's yesterday we opted for a easy stroll around some shops for our morning outing. With a small amount window shopping of all the delicious looking cakes, pastries and chocolates thrown in for good measure. We found a Monoprix (almost like a Parisian target - but somehow more classy) and ended up with a bag full of clothes for miss A - which Anto was assured were almost 'all on special' - I'm not sure the credit card agreed.

Miss A obviously suffering from the long outage (and waking her poor parents up at what seemed like the crack of dawn) snuggled down in the stroller and had a lovely nap. We decided with a sleeping toddler we should not push our luck with the shopping so wandered home via some streets we had not yet explored - finding all kinds of hidden things that you just can't see one street over. Cute hidden parks, museums hidden in unassuming 'office block' buildings were all observed at high speed while we attempted to get back home for some lunch and napping before the big outing of the day...

Lunch was at our local Italian resturaunt (open the front door of the apartment entrance, take one short step down towards the river and walk in - not too hard for us to find).  We decided on a couple of pizzas, which turned out to be enough food for about 4 adults, but Astrid and Anto did their best to get through them. A quick coffee and we ducked upstairs to make sure miss A and her fairly tired parents got some rest... Which of course meant everyone listened to Astrid chat to whoever was listening for 2 hours while no-one got any rest.

We suited up for our assault on the Eiffel tower, which really seems to dominate the skyline when there isn't someone blocking your view - as most of the buildings in Paris proper are only 5 stories tall, with virtually no hills to speak of, a 280+ metre high tower does tend to stand out slightly. We efficiently 'Metro-ed' across to the tower, having decided we could probably do without the 4(ish)k walk today. Astrid was relegated to the Ergo as we had read that taking a pram was just asking for problems - as well as the Metro not being at all pram friendly.

As we walked down the hill (through what has been the smelliest park in Paris thus far...) the tower certainly looked impressive - as we got closer Nic was gradually getting paler at the thought of rapidly heading to the top of such a spindly looking object. A quick run through a ticket check (or 5) and a security check, with the worlds most casual hand check of our camera bag - I suspect that the tired looking people with the grinning baby isn't the demographic they are looking out for.

After a fairly short wait we made it into the lift up to the second floor, at only 128 meters up. The lift up is a fairly large double decker affair complete with 360 Degree windows that lets the full terror of flying into the sky on what increasingly feels like an incredibly exposed structure fully sink in. It is reported that more than 7.5 million people take the trip up each year, with no reports of elevators falling off the side - statistics that are slightly less than re-assuring as you speed upwards.


In the third photo below, the yellow dot is the lift going up. In the fourth photo you can see the lift tracks going straight up. 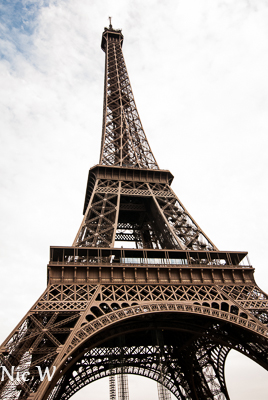 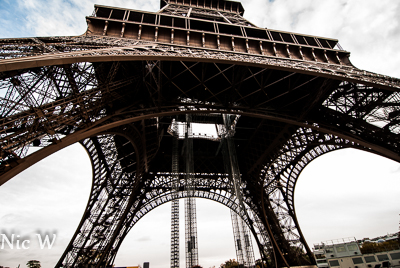 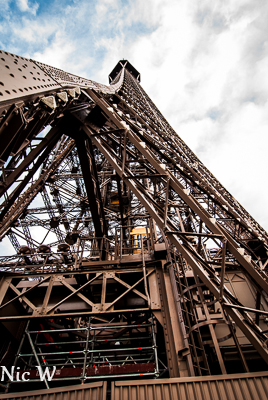 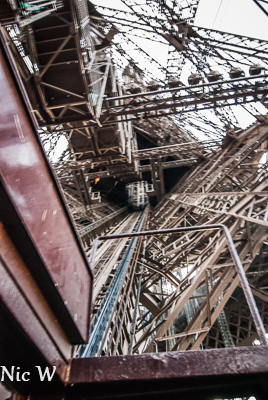 We decided that as we had purchased tickets to the top we should start there and work our way back down. Which resulted in immediately lining up in a 30ish minute queue for the next elevator. Even though there were signs everywhere letting you know that you needed a summit ticket to.. well travel to the summit, about 10% of the people in front of us got pulled out of the queue by one of the fairly helpful guides and sent over to to the ticket office to buy a ticket - some of them very grumpy that this would entail losing their place in the line. Luckily we had managed to grab some food for Astrid on the way to the tower and in between snacking and 'chatting' with other people she was kept amused while we waited.

Once in the summit elevator the very rapid assent to the top, in another glass elevator, with the tower shrinking around you as you go higher - by the top it felt like there wasn't much metal between you and the sky. The top sections were quite crowded and it was 5pm and getting fairly cold, with the upper story being open - aside from the annoying metal fences designed to keep people in. We had a wander around, took the required tourist photos and played the 'try to identify the landmarks' game. We decided against the option of a thimble sized champagne for the prinecly sum of 10, 15 or 20 Euro. Special note to the people who were at the top, not looking out but busy facebooking that they were at the top of the Eiffel tower. We also heard people ringing people to say 'check facebook, I'm at the top of the Eiffel tower'.

The space at the top was pretty limited and there were people everywhere, not exactly the romantic environment you may have been led to believe it is. The views from the top were certainly spectacular with Paris well and truly visible - the lack of hills meant you could see the sprawl of the suburbs out into the horizon. What really stood out was the number of fairly large green spaces dotted in amongst the buildings.

Views from the top: 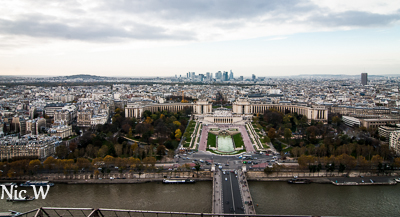 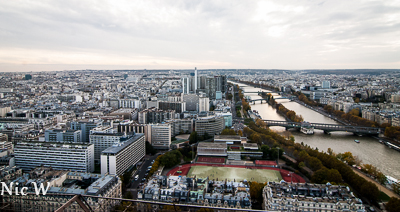 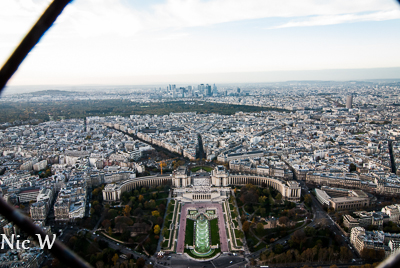 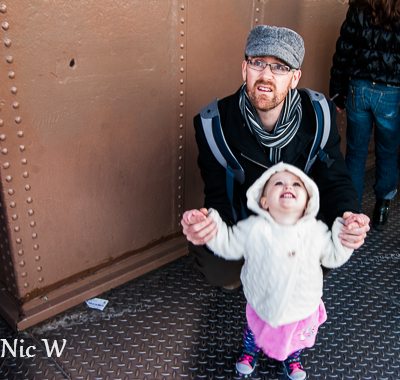 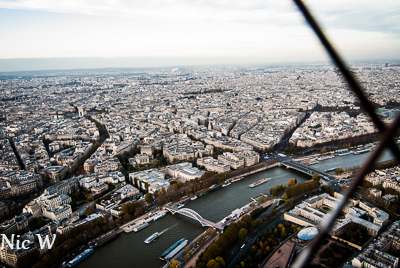 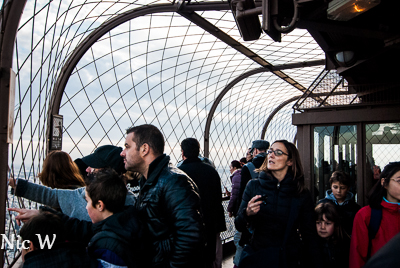 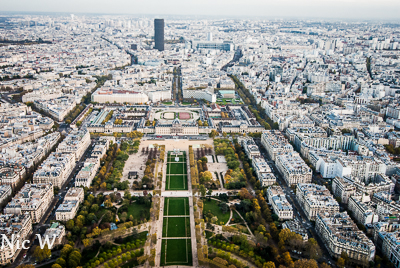 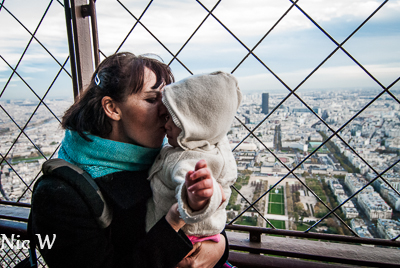 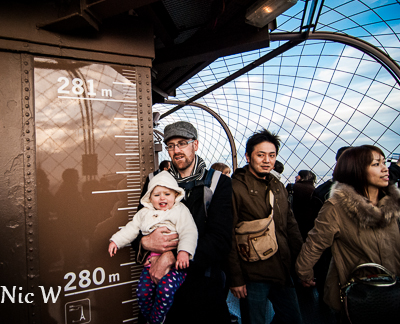 Views from the first level: 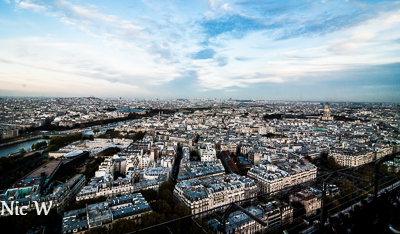 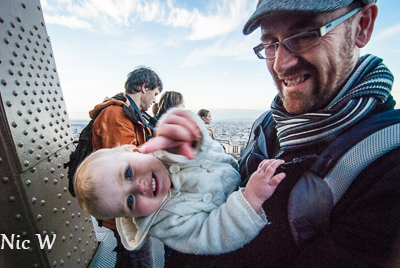 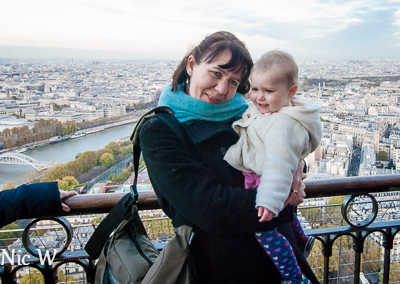 Alas after about half an hour we decided that we should make a move, while Astrid was still in a good mood. The trip down was pretty un-eventful and efficient. On the way back to the metro we found a pond with huge fish and some ducks and geese - which Astrid loved feeding the bread we 'discovered' left over from yesterdays lunch hidden in the camera bag. As we were leaving the lights started to turn on up the tower with a spectacular sunset over the river leaving us with a fabulous last impression as we wandered up the hill to our ever efficient metro ride home. 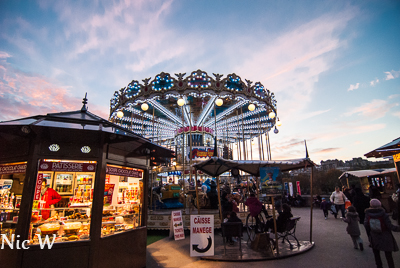 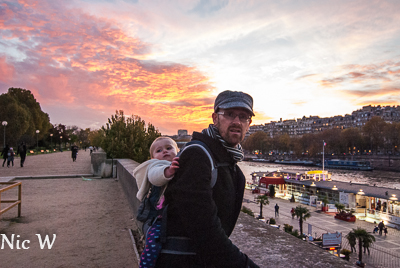 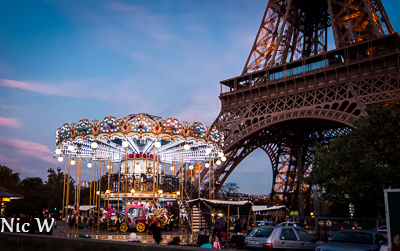 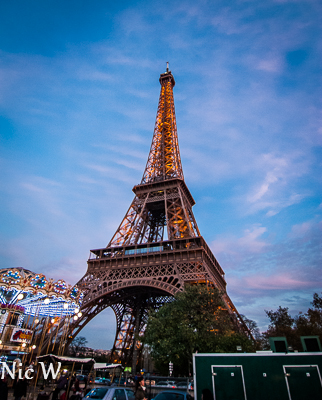 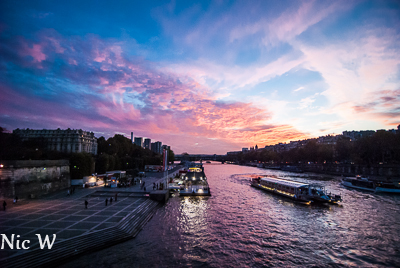 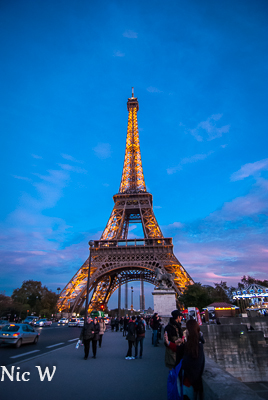 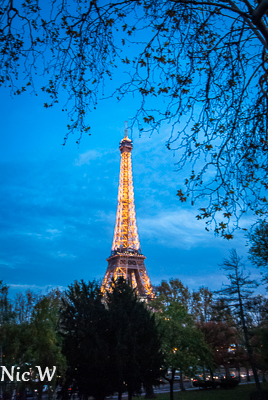